A New Tool to Tackle Speed

The shocking rise in traffic fatalities during the pandemic, particularly pedestrian deaths, has put speed in the safety spotlight. A timely resource published this month by the World Resources Institute provides fresh new guidance for cities on creating low-speed zones, which have emerged as one of the most promising strategies for speed management. The Low-Speed Zone Guide says WRI, “presents strategies for planning, designing, building, and evaluating low-speed zones, and intends to equip communities and decision-makers with the tools to implement low-speed zones that will suit their specific context.”

Toole Design helped gather international best practices from countries including Colombia, Tanzania, Turkey, and Brazil; developed graphics and text for the final report; and provided a technical review of the content. The Guide was launched with a high-level international panel of speakers from WRI, the World Bank, the European Union, and Bloomberg Philanthropies.

The Guide confirms that physical traffic calming measures and target speeds of 30kph (18mph) or lower have the greatest proven safety benefits, and that stakeholder engagement, site selection, evaluation, and local flexibility are key considerations for implementation. Jim Elliott, one of Toole Design’s main contributors to the project notes, “the guide is important because it takes WRI’s previous guide, Sustainable and Safe, which highlights the role of speed in traffic safety, and provides specific planning steps and design treatments that communities can use to lower speeds in a defined area. And not just planning, but also design, construction, and evaluation–the whole shebang.”

The City of Seattle has cut the ribbon on several Neighborhood Greenways in the last 18 months, showcasing a wide variety of ways in which safer, calmer residential streets can be connected by greenway crossings of major roads. Toole Design staff have been closely involved in several stages of the design work for the projects, prompting Craig Schoenberg, PE to remark that “it’s increasingly rewarding to bike around the city and it’s hard to avoid coming across projects we’ve worked on.”

The Central Ridge Neighborhood Greenway connects to the King Street corridor and includes a new signalized crossing of a busy roadway, Jackson Street, where motor vehicles are restricted to right turns only. People on bikes are able to continue straight across the intersection from a travel lane to the left of right-turning traffic. “You can really see that these projects are starting to connect the network,” says Schoenberg. “We are excited to be working on similar neighborhood greenway projects in Victoria, BC, Denver, CO, and several cities in the State of Washington. We have now designed a wide variety of solutions to help people navigate difficult intersections that might otherwise dissuade them from walking or riding; they stitch the community together very effectively.” 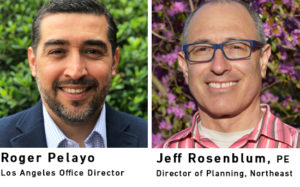 This month, Toole Design welcomes Roger (Rogelio) Pelayo who has been appointed as the Los Angeles Office Director. Roger has nearly 15 years’ experience with multimodal planning in the southern California region where he has completed more than 25 multimodal plans, more than 250 walking assessments, and dozens of traffic studies and community workshops. Proficient in Spanish, he led outreach activities at his previous company, and has excellent meeting and workshop facilitation skills in both English and Spanish. “We are so excited to welcome Roger to Toole Design; we have a talented team of professionals in Los Angeles who are going to benefit from his leadership, contacts, and experience in the region,” says Jennifer Toole, President of Toole Design.

Meanwhile back East, Jeffrey Rosenblum, PE, has come on board to serve as our Northeast Planning Director based in the Boston office. Jeff will oversee planning staff and projects in the Northeast and Canada. “We’re thrilled to have Jeff join our team,” says Nick Jackson, Vice President of Toole Design. “He brings a wealth of experience in policy, planning, and project management and he has extensive local project knowledge and contacts throughout Boston area and beyond. His influence has been pivotal in creating more livable communities, and his passion for our work runs deep. In addition, Jeff has a background and experience in transit, which will complement our growing transit practice.”