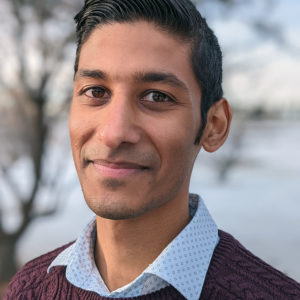 Ali Arshad is one Toole Design’s newest team members. An Engineer in Training (EIT), Ali is working on the planning and design of multimodal transportation projects based out of the Edmonton, Alberta office. He notes, “I actually just started in February!”

When did you realize engineering was going to be your career…and was there a moment, an event, or a person that made an impression on that decision?
I was always strong in my math and science subjects in school and so I had thought that Engineering may have been a good fit. My dad was an electrical engineer, so I had known about the idea of an engineering career and I had a role model to look to. But to be honest I knew very little about engineering till I reached university and learned that there were other types of engineering besides electrical and mechanical. In a lecture in first-year about the disciplines within civil engineering, I recall being really drawn towards the discipline seeing the impact it had on cities and people’s lifestyles. I was particularly drawn towards transportation but I also had no idea of what type of careers existed within the field. I wanted to learn more about transportation so I spoke with Dr. Amy Kim, a transportation professor at the University of Alberta. Dr. Kim introduced me to transportation engineering as an industry and a profession and made me see a specific career within engineering that I could pursue.

What’s the best part of being an engineer at Toole Design?
I haven’t been here a long time but one thing that is apparent is that the company’s values are very well incorporated into projects. I think it encourages me to ask a lot of questions and use my imagination a lot, both of which are aspects of science and engineering that I really enjoy.

The theme for National Engineering Month this year is “There’s a place for you in engineering”…what that does mean to you?
To me this means rejecting the idea that there is a specific type of background or identity that should lend itself to being an engineer. But it also means recognizing that there is more work to be done to remove barriers for people to enter and remain within engineering. That there’s a place for everyone means helping to create and contributing towards environments which are accepting of individuals from all backgrounds.

How do Toole Design’s values of Ethics, Equity, and Empathy influence your everyday work as an engineer?
It encourages me to think about projects with people centered at them rather than what may be the most straight forward or what may have been done traditionally. It also gives me the space to fully consider the impacts that proposed ideas have on all users.